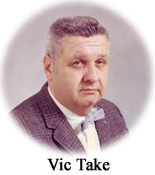 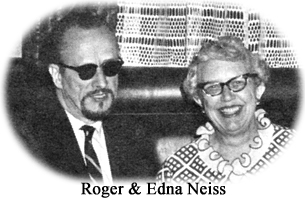 After watching a discussion on the Today Show one morning in 1961 which called the two-seater “Personal Thunderbird” an “American Classic”, CTCI founder Vic Take developed a vision of an organization for fans of the little T-Bird. His first action was to run a short classified ad in a magazine now called Car and Driver. He began a correspondence newsletter in May 1961 which raised some interest in starting a club. Vic referred to it at the time as a “shoestring organization” operating on a $1.00 donation from each correspondent. Already a subscriber to Ford Times Magazine (Oct. 1961), Vic then published an announcement of the founding of CTCI as a fledgling T-Bird Club. Responses poured in and the correspondence newsletter membership boomed.

As the tasks became too large to handle, Vic approached the Bay Area Thunderbird Owners Club (BATOC which had organized in 1958) inquiring as to the possibility of their organization taking over this fledgling group. BATOC called a special meeting, but after consideration turned down the idea. At this point in time BATOC’s “Birdland” Editor, Roger Neiss, decided to assume this responsibility on his own. Roger had a type composition business working with local printers, so he was off to a good start. A CTCI office was established in his Oakland, CA, home where in addition to Roger’s wife, Edna, several club volunteers offered to help keep up with the ever-increasing load of paper work. These early volunteers included Phyl Brantley of Dixon, IL, and Ruth Larsen of Wheaton, IL. Assisting as Directors were Ann Kvilhaug of Des Moines, WA, and Skip Riggs of Concord, CA. 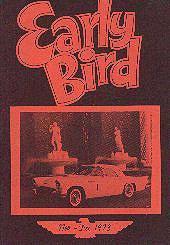 With the Jan./Feb. 1963 issue, the EarlyBird was born. Vol. 1, Nos. 1 & 2 was more of a newsletter, being only 8 pages long, but was the beginning of a method for Classic Thunderbird enthusiasts from around the country to share their ideas and their love for their little beauties. It was a combination of national CTCI news, and also served as the local BATOC chapter newsletter. Thus, the EarlyBird began with CTCI dues of $5.00 per year and a cost of about $100 an issue to print. In 1963 you could buy a soft top for $135 and a “cherry” T-Bird for $1,700!

In June of 1963, CTCI members were invited by the Thunderbird Sports Car Club of Chicagoland to attend a celebration of Henry Ford’s 100th Anniversary in Dearborn, MI. Nineteen little T-Birds participated. Ford Motor Company was so delighted that they shot many feet of promotional footage of the event. Since such a good time was had by all, Ford invited the Chicago club back again in 1964. The Chicagoland members graciously asked all CTCI members to come along, too. Because there were more than twice as many CTCI people attending, this event has become known in CTCI history as the “First National Reunion” (although not an actual CTCI sponsored event). This historic date has been memorialized by CTCI sanctioned conventions in Dearborn in 1974, 1984, and 1994!

Ford Motor Company treated the 79 attendees royally, providing them with elegant meals in the Ford Executive Dining Room, and a tour of the Rouge Assembly Plant to see the “new” 1964 Mustangs. They also provided distinguished guest speakers such as William E. Burnett, (who served as Executive Engineer for the Thunderbird operation during the years our ‘Birds were being built).

A meeting of CTCI members was held on the last day at which time the first by-laws were approved and turned over to Ford Motor Company’s legal department for review. Following this event the first CTCI election of officers was held in November 1964, and the elected Directors for 1965 were: Sandy Keys (WA), Ruth Larsen (CA), Stu Whittelsey (CA), and Vic Take. Roger Neiss continued as an appointed Director and Editor.

On May 17, 1965, CTCI was officially incorporated in the State of California, and the Directors appointed officers as follows: Roger Neiss, President; Edna Neiss, Secretary; and Stu Whittelsey, Treasurer. At that time the Directors also approved the first seven CTCI Chapter Charters whose applications were on file as of June 6th, 1965. They included: #1 Olympic (Seattle, WA), #2 Northern Ohio, #3 Peninsula (CA), #4 Bay Area (CA), #5 American Road (Detroit, MI), #6 Colorado, #7 Earlybirds (So. CA). These Chapters along with #8 Tulsa and #9 Chicago were presented their Charters at the Estes Park National Convention that summer.

CTCI began to grow by leaps and bounds. Two of the many early members who worked tirelessly to help CTCI grow and prosper were Paul Hudgins and Cliff Younger, both in California. Ford Johnson (WA) was a great promoter of CTCI, driving his T-bird to all national and most regional CTCI conventions. In Michigan, we were blessed to have Lois Eminger, a FoMoCo employee, touting CTCI to Ford executives. It was Lois who managed to save our factory invoices from destruction.

By October 1972, CTCI had grown to 4,250 memberships. Roger and Edna Neiss could no longer continue to work out of their home. Paul and Cliff approached Margie Price to see if she would take the job of CTCI Office Manager. With her acceptance, the office records, EarlyBird magazines and stock were shipped to Southern California where the first Culver City office was opened. Gary Noyes was asked to take over the editorship of the EarlyBird.

Due to his declining health, in September 1975, Executive Director Paul Hudgins recommended to the CTCI Board that Margie also assume his duties. Margie was well qualified for the job, and with assistance from Billie Jeane Reed, Shirley (Rosie) Lind and Sue Smith, she worked tirelessly directing the operations of the CTCI office and as a willing worker at every CTCI convention for 25 years, retiring at the end of 1997. After Margie’s retirement, Jo Dunn stepped in to keep the office going for several years. As the years have passed CTCI has continued to staff its office with knowledgeable CTCI members whenever circumstances allow.

In 1988 at the 25th Anniversary of CTCI’s incorporation in California, CTCI had nearly 8,000 members and 100 chartered chapters representing all 50 states, and 17 countries of the world, truly the International vision of founder, Vic Take.

On August 13, 1997, after years of renting office space, the Classic Thunderbird Club International purchased a headquarters office in a commercial condominium complex in Signal Hill, CA (an industrial suburb of Los Angeles, near Long Beach). In 2000, the building was paid off thanks to the generosity of the members.

CTCI joined the electronic world of the internet on July 1, 1998, with the introduction of its first web site. This site was conceived, designed and initially maintained by member Jerry Wotel. This web site continued to improve and evolve over the years, providing members with a searchable technical article index, an online shopping cart for the purchase of merchandise from the club store, and Gil’s Garage – a collection tech tips and articles. In 2010 a completely new web site was introduced with a new look and feel, including much of the content from the original site along with the addition of News and Events pages to keep visitors up to date on Thunderbird events and club news. The new site also offers each of the local chapters an opportunity to have an informational page about their club along with a link to the chapter’s web site, if available.

By our 50th year, our membership is over 5,600 members and nearly 100 chapters worldwide. The 64-page EarlyBird is now full color, and is still the single best printed source for historical data, restoration knowledge, maintenance tips, sources for parts and cars and news around the world of T-Birding events. We’re very proud of our EarlyBird editor, Lin Somsak; she has been doing an outstanding job since 1985, earning 13 Golden Quill awards to date. CTCI has reprinted and made available to members over 40 different technical and shop manuals, decals, owners handbooks, and sales brochures that would otherwise be obsolete (even though it costs thousands of dollars to reprint just one of these technical manuals). We have also kept a close liaison with Ford Motor Company and other manufacturers through the years, helping to keep parts available for our little ‘Birds.

In this digital age, the EarlyBird is now being created on the computer with all proofing and editing done online. We have shop manuals on CD and our web site, www.CTCI.org, continues to evolve with links to our chapters, vendors and online store. Members from around the world have the ability to communicate with each other and with the CTCI office making inquiries, sending ads, articles and photos by email. Many members still drive to conventions to enjoy our friendships and, for some, the challenges of competition, showing our Thunderbirds, but we now use GPS and cell phones to navigate and communicate while on the road. Laptops are used in the score room to keep the scoring process organized and archived for the future. And the best news is that although CTCI has grown into a large organization with an annual budget of over $250,000, our dues (including our magazine subscription) are still a reasonable $37.50 per year due to the wise and efficient management of our volunteer Directors and Officers along with our hardworking office staff.

Members continue to gather all over the world to prove that the Classic Thunderbird was surely one of Ford’s “Better Ideas”!