While no cars had been produced during World War II, the late 1940’s saw a huge rush in production as the American car companies tried to fill the postwar demand for vehicles. One of the most popular types of vehicle was the sports car. American soldiers in Europe during the war had seen Italian, German, French, and English sports cars and had brought some of these vehicles home with them. At the same time, interest in motorsports increased and car racing gained popularity.

Given these influences and the burgeoning American economy it was no surprise that the introduction of the 1955 Thunderbird was a huge success, easily filling a market niche. As Motor Trend’s Detroit editor, Don McDonald wrote “Perhaps the most outstanding feature of the new Ford Thunderbird is the clever wedding of sports car functionalism with American standards of comfort”. The T-Bird roadster, introduced at the Detroit Auto Show in 1954, was a two door roadster with a focus on modern comforts, conveniences and all weather protection, as well as power, performance and handling. In short, it was the essence of personal luxury.

The flight of the Ford Thunderbird has taken several twists and turns during its first 42 year existence while maintaining its path in the forefront of American automobile legends. Oct. 22 was the date of public introduction of the original two-seater in 1954. Eleven generations of Thunderbird have produced treasured collectors’ items in a variety of models, including the design which in 1989 earned Thunderbird its third award as Motor Trend’s “Car of the Year.”

More than 5,000 names were considered for the new Ford project in 1954. A young Ford car stylist, Alden “Gib” Giberson, won a $95 suit and an extra pair of pants from Saks Fifth Avenue for suggesting the name Thunderbird.

Thunderbird enjoys a storied history whose iconoclastic entry onto the scene in 1954 single-handedly erected the personal luxury-car segment in the United States. The Thunderbird two-seater was instantly popular with overtones of a high performance sports car, yet it had a strong appeal to luxury-minded buyers seeking refinements such as roll-up windows, a selection of power extras, and steel bodywork as opposed to fiberglass.

Production of the car designed by William P. Boyer (under the direction of Franklin Q. Hershey) began Sept. 9, 1954, at Ford’s Dearborn (Mich.) Assembly Plant and generated immediate excitement. Customer demand for Thunderbird resulted in its October public introduction which was nearly a full month ahead of schedule. Public orders totaled more than 3,500 within the first 10-day selling period, while planned volume for the model year was only 10,000 units. Ford sold a first year total of 16,155 Thunderbirds. 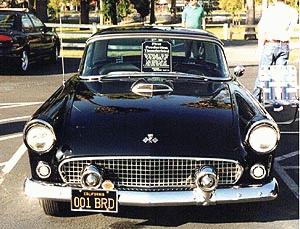 The 1955 model had a removable hardtop with a 102 inch wheelbase chassis that was 175.3 inches overall, with a width of 72 inches and a height of 52 inches. Curb weight was 2833 pounds. The engine was a Mercury 292 cubic inch V-8, exclusive to the Thunderbird line, which had 198 horsepower with the automatic and 193 horsepower with the manual transmission. The first Thunderbird came off the Dearborn assembly line September 9, 1954 and had at least 4,000 orders waiting on the first day of production. Over 16,000 units of the 1955 Thunderbird were ultimately sold.

The car sold for a base price of $2,695 with the convertible selling for $2,765 and was available in five colors: Thunderbird Blue, Raven Black, Snowshoe White, Goldenrod Yellow, and Torch Red. All cars had vinyl upholstery matching the exterior paint color.

The 1956 Thunderbird was very similar to the 1955 model with some notable exceptions. Portholes were now being offered as an option with the hardtop, a move designed to increase driver visibility, but that went on to become one of the more distinctive features of the Thunderbird. Other design changes included the relocation of the spare tire from the trunk to the exterior of the car right above the newly extended bumper.

Last-minute improvements, including the addition of the optional 312 CID V-8 engine, gave the second edition of the Thunderbird better handling and increased performance to also improve Thunderbird’s sports car feel.

The 1956 Thunderbird also saw an increase in price with the hardtop now selling for $2,944 and the convertible selling for $3,019. With options however, the price jumped all the way to $3,800. 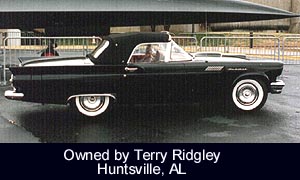 The 1957 Thunderbird included a restyled front grille, rear deck and new bumpers. It was the first to have a fully padded dash surface. New features included a Volumatic Radio System which automatically increased the radio volume as the car’s speed increased.

There was also the Dial-O-Matic power seat which provided a memory setting. When the ignition shut off, the seat returned to the rear position, allowing for easier entry to and exit from the car, and the seat then returned to its pre-set position when the ignition was started. The rear deck was restyled once more with the spare tire returning to the trunk which had a new wheel well. This allowed the tire to be stored in a new vertical position that left adequate trunk space for travel and leisure activity equipment, correcting a complaint from the earlier model.

The 1957 T-Birds had a selection of four engines. The “C” series was the base-issue Thunderbird. It had a 292 cubic inch displacement (CID) engine with a 2 barrel carburetor, and was rated at 212 horsepower. It was available only with the 3-speed manual transmission and typically had few options. There were approximately 3,300 of these produced.

The “D” series was most common with approximately 16,423 produced out of the total 1957 Thunderbird production of 21,380. This series had a 312 cid motor with 4 barrel carburetor which produced 245 horsepower. Its 0-60 mph times were in the 10-second range and it had a top speed of about 115 mph. It was available with a 3 speed/overdrive manual, or a Fordomatic transmission.

The “E” series had Ford’s “High Performance Special” engine. It was rated at 270 horsepower through the combination of a “hotter” cam and two 4-barrel carburetors. Also in this series was Ford’s “Racing” version which produced 285 horsepower. All together there were 1,499 “E” series produced. They were available with 3 speed transmission with or without overdrive, or an automatic transmission. 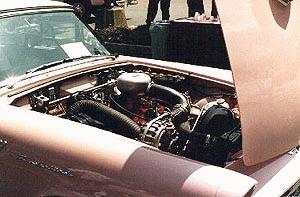 The “F’ series Thunderbird has a 312 cid motor with special heads, cam, distributor and 4-barrel carburetor. Additionally there is a Paxton-McCulloch VR57 supercharger which “force feeds” the carburetor with up to 6 psi of compressed air. Although the McCulloch rated this setup at 360 horsepower, Ford indicated a rating of 300 horsepower.

Only between 208-211 were produced. The first 14 of these were supercharged D-Birds, called “D-F ‘Birds” (they had the “D” data plate designation rather than the “F”). They were produced in January 1957 to qualify the supercharged Thunderbird as a production car for NASCAR competition.

The F-Bird was available with any of Ford’s transmissions and the complete list of accessory options. The supercharger was a rather expensive option for the times at $500.

While kept in production for an extra three months, the 1957 Thunderbird was the last of the classic two-seaters. The last one rolled off the assembly line Dec. 13, 1957, bringing an end to an era.