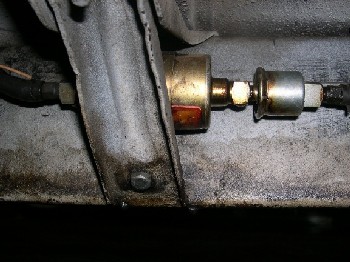 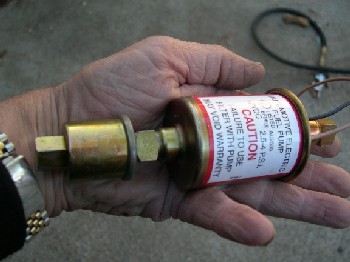 Vapor locks are created in fuel systems when excessive heat turns liquid fuel into a non liquid vapor. Vapor locks usually occur in automobile fuel systems between the tank and carburetor. Most fuel we purchase today contains ethanol which adds to the possibility of a vapor lock especially in hot weather and during sustained loads while driving over steep terrain. Most vapor locks occur in the engine compartment of our Thunderbirds. They can also occur in the fuel line from the tank if the fuel line is too close to the tail pipe as it passes over the frame. Stainless steel fuel lines, although they look great, absorb more heat and can also contribute to a vapor lock.

An electric fuel pump can eliminate a vapor lock when properly installed and I stress when properly installed. They should be installed as close to the fuel tank as possible. They should never be installed in the engine compartment for two reasons, distance from the tank and excessive heat from the engine. If the electric pump is installed in the engine compartment they act as a heat sink which can cause a vapor lock. Electric fuel pumps are designed to push fuel and they loose efficiency when pulling fuel from the tank. I do not recommend by passing the mechanical fuel pump when an electrical pump is installed. If you feel it is necessary to by pass the mechanical pump should it fail a by pass hose can be fabricated and carried to be installed if you desire.

I recommend an inline pump similar to the one pictured, which was purchased from Car Quest Auto Parts P/N E8016S. It is installed for back up and used only to over come a vapor lock if necessary or cold starts if the vehicle has been setting for a long period of time especially on 1955/56 models. They are designed to allow fuel to pass through when the mechanical only pump is in use and can be used to augment the mechanical pump when the engine starts to surge at the onset of a vapor lock… I recommend installing the electrical pump in the fuel line on the out board side of the frame inside the second frame to floor brace away from any heat source. It is not necessary to drill a mount hole because a hole already exists in the brace. The pump has a wrap around mount bracket that requires one mount bolt which can also be used as a ground for the pump (black wire). The light brown wire on the pump attaches to a 12V power source controlled by an on off switch installed in a location of your choice. An impact shut off switch or shut off switch actuated by the oil pressure switch may be installed for added safety if you wish.