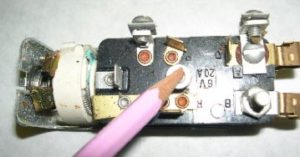 Removal of the switch is accomplished by first disconnecting the battery then reach under the dash and pressing the round head of the release pin in the center of the switch. Holding the pin in allows the switch knob and shaft to be pulled out of the switch. It sometimes requires moderate force to push the pin in and pull the shaft out. When the shaft and knob have been removed you will see a cross slot in the chrome center of the bezel. Use a bezel tool or straight screw driver to remove the center bezel. The switch can now be removed from the dash.

If you chose to replace the switch remove one wire at a time and install on the new switch. If you chose to by pass the rheostat, solder a connector wire from the post near the rheostat to the power supply post as shown. If the rheostat is by passed the dash lights will have full illumination without the benefit of dimming control.