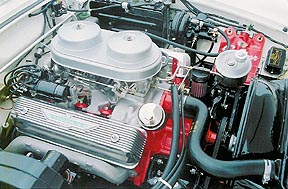 The 1956 8V (dual four) Kit was introduced and released to the public July 6, 1956 by Production service letter P-311a. The title of the letter was 312 CUBIC INCH HIGH POWER ENGINE KIT. Stating “A new high power kit (B6A-9000-B) has been released for use on the 1956 312 cubic inch passenger car engine, when customers may desire to obtain maximum performance from 1956 cars where it is desired, as in law enforcement, stock car racing, etc.” A quote from the letter states “This new power pack kit will be available through Ford dealers and will be adapted to 1956 312 cubic inch passenger cars with standard or overdrive transmissions only.”

It is believed that few if any of these kits were installed during the 1956 production year due the release date to the public, July 6, 1956 and the end of production of the 1956 models, August 24, 1956. The first high out put single four-barrel kits introduced in production letter M-118a as well as the dual four kits introduced in production letter P-311a were not installed at the factory. They could be special ordered over the counter from most Ford dealerships. Any mechanic could install the kit.

In early 1957 a letter was sent to all Ford dealers dated February 4, 1957 stating, “This is to advise that we currently have a limited supply of B6A-9000-B Engine Kits used with the 312 engine assembly. These kits are now being offered for sale at a reduced price of $100.00 Dealer Net: They were formerly priced at $315.00 Dealer net. These kits are being offered as is and subject to prior sale”. Documentation from one the B6A-9600-B kits provide installation instructions for passenger cars with standard three-speed or overdrive transmissions. The last paragraph in the instruction sheet found in one of these kits states, “When installing this kit on a Thunderbird, follow the same procedures as listed above.”

“The following parts are necessary for the Thunderbird installation: AH- 9725-F Shaft Assembly, AH-99830-C Hanger Assembly, EDB-9600-B Air Cleaner” (Oval Air Cleaner). I interpret this to mean these parts were not in the kit, it would not be practical to supply two types of air cleaners in the kit. Additional research is being conducted on all the kits.