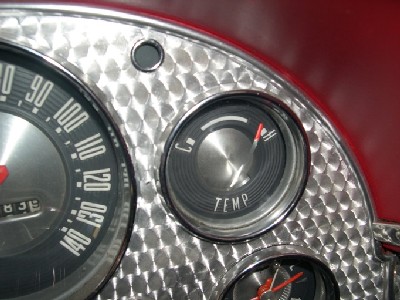 When it comes to the1955/56/57 Thunderbirds, this subject more than likely, has been discussed and written about more than any other. Even when new, under certain driving conditions (parades & city driving) when coupled with excessive ambient temperature, the Thunderbirds were prone to run toward the hot side of normal. The primary reason for higher than normal operating temperature under these conditions was due to the design of the engine compartment. The small tight engine compartment did not allow for free air flow to carry out the hot air transferred from the radiator. Also, there is a basic design flaw in the water pump system. The T’Bird engines were the same engines used in thousands of Ford passenger cars and trucks, but the passenger cars and trucks did not have the same tendency to overheat.

The above conditions cause overheating especially during city driving or parades. This problem can be overcome first by cleaning the block. The rust must be removed by breaking it loose and flushing it through the core plug holes. This can be done with the engine in the car, but best done with the engine removed. After the rust is removed, a high volume water pump with an extended impeller can be installed. The extended impeller was developed by CASCO and is available from them and maybe other dealers. In addition a thermostat with a larger opening can also be used. This combination has proven to be very effective without ill effect.

Other items that contribute to a cooler running engine are as follows.

All the parts mentioned in this article are available from major Thunderbird Parts dealers.

The most important items are a clean radiator, rust free block without build up around the internal water jackets and properly set timing throughout all power ranges.

The bottom line is after properly complying with all the suggestions and the engine still over heats it has rust build up as shown in the photos below or is a 312 with cylinder over bore of 0.080 or more.

A major contributor to overheating conditions can be caused by neglecting the cooling system. It is recommended that the cooling system be drained and flushed every two years. Proper cooling system maintenance prevents rust and sludge buildup around the cylinder wall cooling jackets. The attached photos show what can happen when a cooling system is not properly maintained. Photo # 1 Shows rust build up in a Thunderbird 292/312 C.I. engine that had been neglected. Photo # 2 Shows some of the rust that was removed by hand. Photo # 3 Shows most of the rust removed.

Removal can be accomplished by: 1-Remove as much rust as possible by digging and probing with a coat hanger or similar object. 2-Pressure wash until all the rust is flushed from the block allowing coolant to flow freely around the external cylinder walls inside the engine block. 3-Replace the core plugs with brass plugs. When servicing the cooling system use a 50/50 mix of anti-freeze/coolant and water. Coolant rust inhibitors start to break down in a couple of years requiring the system to be drained and the coolant replaced. A clean cooling system promotes a cool running engine. Gil