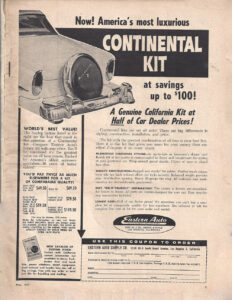 Most American cars built in the nineteen-thirties had an external spare tire which was usually mounted on the rear between the body and the bumper. In the nineteen-forties, the spare tire was moved and secured inside the trunk of most American cars. One exception in that era was the Lincoln Continental which had its spare tire mounted on the rear of the car. This design feature more than likely resulted in coining the term “Continental kit.”

By the early fifties, continental kits had lost their popularity resulting in American cars not being equipped with a factory kit. The sale of aftermarket accessory kits, however, was still fairly popular. One major manufacturing company of quality kits was HUDELSON-WHITEBONE Corp which was headquartered in Champaign, Illinois, and San Francisco, California. HUDELSON-WHITEBONE was producing kits in 1952 for many American-made cars that were being sold by several aftermarket automotive accessory companies.

Despite rumors you may have heard regarding 1955 Thunderbirds featuring a factory designed kit, no production or prototype model were so equipped. The Ford Division’s General Manager, Lewis Crusoe, owned a 1955 model featuring an aftermarket kit which was installed after the car left the Dearborn assembly line. The continental kit was not designed and built by FoMoCo, rather it was supplied by an aftermarket company; more than likely the HUDELSON-WHITEBONE Corp.

The attached advertisement, which was found in a Motor Life magazine, shows that the Eastern Auto Parts Co was selling 1955 Thunderbird kits for $119.50 plus tax and shipping. There were three known aftermarket kit design types available for the 1955 Thunderbird, two of which were very similar in appearance. The two types featured a steel splash pan that extended out from the rear body panel to the rear bumper with stamped steel humps that extended over each of the two tailpipes. The slight difference was one kit had louvers punched in the area outboard of the humps and the other pan featured a smooth surface outboard of the humps. The most reasonably priced kit had a flat steel splash pan located between the rear body and the bumper. The exhaust was extended over the flat pan through chrome-plated flexible tubes that connected to the standard exhaust outlet bumper guards. This kit sold for $49.95 and could be purchased at the J.C. Whitney Parts Co as well as from other aftermarket parts suppliers.